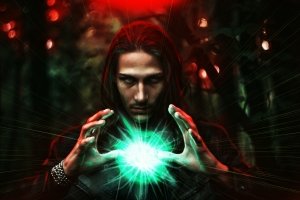 Elasaid comes face to face with a lover from a past life in Mercury’s fiery chamber and seeks permission to cross the labyrinth from seven old men. Will she pass the test? Or will her past make her a prisoner?

Hamish leapt around the cliff with gravity defiance under fireballs that cracked into its iron clefts and crevices.

‘The labyrinth wants to help, but it only knows how to receive the dead. Don’t produce a morsel of fear’, said Hamish; a stranger to Elasaid and Cameron.

‘How can you not fear?’ shrieked Elasaid. ‘We’re being bombed.’

‘That’s Mars’ fury, but we’re at the side of the labyrinth, on the outskirts of Venus’ chambers. If you calm down, it’ll carry us out of harm’s way into Venus’ domain’, Hamish replied.

Hamish took Elasaid’s hand. ‘The labyrinth is ruled by copper…it feels emotion.’ He pulled her down effortlessly and Cameron climbed after them until the three stood next to each other on the same ledge. He whistled and three Corinthian columns sprouted from the labyrinth floor.

‘She needs to know you love her.’ Hamish wrapped his arms and legs around the top of the first column; now full grown. ‘C’mon.’

‘This place is messed up’, Campbell said as he looked angrily at Elasaid.

‘How else are we going to get down?’ Elasaid asked. She leapt onto another column. Cameron reached for the third.

Fireballs ebbed as the columns shortened to set them down before an arch framed bucolic vista of wildflowers, butterflies and a distant stream.

Hamish watched the two mortals. In the physical world, he’d held a tolerable fortune, come to him by the virtue of being a soul prince, but it didn’t count for much in the banishment of an eternity. If eternal had many faces of escape, this girl with her naivete might offer a rung on liberty ladder. Mars’ believed in him; that forger of weapons, for up until now the red planet was his only hope, for it hadn’t reconciled in the other planets’ business that his soul was destined for a greater purpose.

The brother reeked of trouble, yet the girl smelt different. In her, the odour of world domination ran strong; harnessing such power to prise open a portal into the lands of his choosing might be possible. How to time it? He didn’t want the acrid land of his last sojourn into death and plague. Dominion over the chambers had to be orchestrated. Her body still dwelt there, in a coma. It might be possible. These two needed guides anyway. It’s wasn’t possible to traverse across Venus’ Gate without knowing its secret codes, symbols and signals.

‘I believe. Worlds have conspired to bring us back together’, Hamish said while gazing into Elasaid’s eyes. ‘Coincidental?’

‘Shut up!’ Elasaid angrily said to her brother.

‘Didn’t I call on the labyrinth to save us from Mars’ sulphurous attack’, proudly announced Hamish.

‘It’s a few stones and a bit of grass. Who are you anyway?’ asked Cameron.

‘Come with me and I will show you’, Hamish said. ‘We need to get the permission of the alchemists before we can travel further. You do want to get out of the chambers, don’t you?’
Taking their silence as a yes, Hamish led them to the garden’s edge, where a small room started to appear. Mosaic tiles, faintly arabesque with blue haze, adorned the walls. The floor spread from the mosaic tiles under rugs on which seven older men sat with their backs against the mosaic, dressed in different coloured robes and turbans.

‘Don’t make them angry. We need their permission to cross the labyrinth’, said Hamish in a bold tone.

One of the old men indicated they should sit on the rugs by another wall.

‘They’ll let you go through to the seventh chamber. You’re mortal. But I have to prove something’, said Hamish.

‘Sire. I have worked really hard’, Hamish said while rising from the floor.

‘But that doesn’t show, boy’, said the second old man.

Sparks from outside the antechamber heralded the entrance of the Fallen Angel, and on seeing Elasaid and Campbell, he sat next to them. ‘You have more pluck than I imagined. How did you get this far?’ he said, then paused under the shock that Hamish was being questioned by alchemists. ‘Are you with him?’

‘You and your weary questions’, responded the Fallen Angel. ‘But seeing as my mood is enriched by the glorious scene laid out before my eyes I shall endeavour to enlighten you. The alchemists are brewing. It’s the time when a lost soul or fallen angel may appeal to cross into the higher chambers. Before the distillation process.’

‘Beyond here in the chamber of the labyrinth, before the upper chambers, everyone has to be purified by Venus before reaching Mercury’s Tower’, explained the Fallen Angel.

A third old man stood up, shouted, and flailed his arms at Hamish.

Elasaid rose; the fight against injustice swelled her cheeks. She walked to the men and pulled the Magnum Opus from her belt.

‘My dear, you cannot…’ said the Fallen Angel.

The third old man pointed his flailing arms with gesturing movements at the angel, who complied with silence.

‘He’s with us’, Elasaid said, nodding to Hamish, then turned the book for the alchemists to view.

The third old man stopped and studied her for a moment. Elasaid smiled nervously at Hamish, for a fleeting pass, and clutched the Magnum Opus to her chest.

The third old man saw the reaction. ‘Why would you plead for this man?’ he said.

‘We know what she carries’, the third old man said abruptly.

The Fallen Angel turned to Campbell and said, ‘I’ll be very annoyed if this affects my plea.’

The third old man homed in on Elasaid. ‘Are you so bold that you dare alter what’s ordained?’

‘Throw them out’, shouted the fourth old man.

‘It doesn’t belong to her anyway’, added the sixth.

The third old man raised his arm for calm. ‘The book you carry is the Magnum Opus. The founder of our council, the eighth member, Hermes Trismegistus compiled the book then took it to the upper worlds.’ He walked closer to Elasaid. ‘Air. We don’t speak of each much. It’s fickle. Sweeping the lakes, rousing a leaf and branch with a headwind that punches the nose; so people question if the headwind might follow their turned backs. It’s set by Venus’ conjunctions, or her moods, for that day. Do you see?’

‘I have no idea what you are talking about’, Elasaid said with a contemptuous heart.

‘She’s tormented’, answered the fourth old man. ‘Not with the majesty of Jupiter, the discipline of Saturn, the forcefulness of Mars, nor the quick wit of Mercury. How do you hope to gain safe passage through these chambers without her noticing? How must you pass the Venus Gate and beyond to Mercury’s Tower? There is no other way. Mercury knows you’re in the chambers, as does the Fallen Angel; dependent on their mood they might tell her. Let’s hope they do not.’

‘I will not say a word’, said the Fallen Angel.

‘Does she direct the wind?’ asked Cameron.

‘Likes to think she does, but she’ll want to pick over your lives and keep you as a prisoner, headwind or no headwind, if you cross her borders.’ said the sixth old man.

‘Strange alliances are forming’, said the first old man. ‘Inconceivable foes; now friends. Are you able to move swiftly in the chambers and antechambers for no prediction of mischief will stand to the test of hindsight?’

‘Don’t’, said the seventh old man, who was oddly quiet until this moment. ‘They can hear us. Voices echo.’

They all stopped to monitor the air.

‘What alliances are forming?’ asked Elasaid.

‘When we exerted our will over the planets to claim back lands and territories traditionally managed by the planets’ conjunctions; chaos was unleashed. Most distant planets have taken an unwelcome interest. We fear a great war not yet seen since the ancients’; the seventh old man explained.

‘That’s your business’, said Cameron, ‘we need to get out.’

‘Where are these planets?’ Elasaid asked. ‘They’re never in their chambers.’

‘Why would a king in his castle meet you?’ answered the Fallen Angel. ‘He might look out of the window and see you tending the sheep outside the castle walls, but he wouldn’t notice you.’

‘Tending sheep, she can’t even keep a goldfish’, said Cameron while sniggering.

‘Mmm, you miss the point. You are mortal so why should I be too surprised?’ said the Fallen Angel as he looked across to Hamish then back at Elasaid. ‘You will meet others who will covet that book that you cling too, long before the planets come down from their castle.’

‘Rumors circulate of an attempt to take rulership of the cosmos’, the third old man said. ‘An underestimated force building on ancient forces. Those furies that pressganged you – they’re of a different time – never to be roused. How do these events come about that cause our breath to stutter? The wind catches a leaf on a chestnut tree, the leaf’s spine flexes, a smooth passage over its green flesh. Yes, flesh. Yet in a hypnotic dance from the air, the tree is possessed. No more are we able to stand and watch this bewitchment of the elements, trees, and soon the beasts who are the most easily seduced.’

‘He’s loyal enough’, answered the third old man, ‘but their antechambers are quickly breached. You, a mortal, entered too easily into that domain. The pathways to the chamber of the sun are many, ponderous and long. What chance do any of us have given the notorious devilment that will divert any purposeful journey to the source of everything? Some forces in the chamber neither want change or fortune. Only destruction.’

‘We will give you passage’, said the first old man assertively. ‘But on one condition. You will take a guide.’

‘I am qualified’, said the Fallen Angel.

‘You will go with the White Swan’, the first old man said.

‘I knew this wasn’t going well’, muttered the Fallen Angel.

The first held up his hand for silence. ‘The swan is a notorious, cankerous beast, but a truthful and a better guide than this notorious soul of malevolence and mischief.’

‘Well said’, replied the Fallen Angel. Elasaid growled at him.

‘Why? Doesn’t the support of Mars convince you of my credentials?’ shouted Hamish.

The second old man laughed. ‘Mars. What a ridiculous idea.’

If you enjoyed reading this, then download The Seven Chambers game and continue your journey.