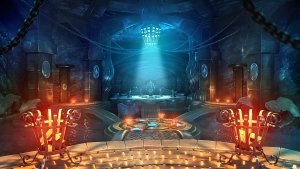 Elasaid and her brother, Cameron, awake in Saturn’s Chamber after being carried through a portal from the Scottish Highlands of 1746. But what is waiting for them on the other side?

Elasaid awoke to the sound of crackling while her eyes opened onto the steel brasiers of dancing fires. There were four of them. Cameron sprawled beside her on the floor. The space appeared as a cave, albeit an inhabited one, as it contained signs of comfort in a very peculiar way. What was this confinement? At that precise second both her life in London and the Scottish Highlands flashed past as a vision, existing at the same time and place. She stood, her feet a little wobbly, as she sought some stability on the uneven ground. The winged beasts that had delivered them through the strange portals and corridors were gone; only a few coarse feathers remained.

Sparks whirled up into the darkened leaded space and a disgruntled fallen angel emerged out of the fiery particles. Two scorched stumps protruded from its shoulders.

‘I’ve never seen such things, to have mortals in Saturn’s Chamber,’ said the Fallen Angel.

The Fallen Angel moved across the granite floor, mumbling, checking certain points in the chamber by knocking on the rock with a steel pole. Cameron moaned but still hadn’t recovered full consciousness. Elasaid went over to check on him.

‘He’ll come round soon enough,’ said the Fallen Angel, now staring directly at both of them. ‘So, no portal has been breached; therefore, the mystery continues. What do you remember?’

Elasaid asked, ‘First things first, where are we and who are you?’

‘Hmm, you have a strange power.’ The Fallen Angel crossed its arms. ‘You have the Azoth it appears. But still, that doesn’t explain your presence in the chambers. Is it the beasts? They’re the mafia – always making deals. You can’t trust them.’

‘The beasts,’ repeated Elasaid, ‘yes I suppose, if you mean those birds with human heads and hair full of snakes?’

‘The furies! Oh my, oh my, oh my.’ The Fallen Angel said while shaking its head. ‘They’re never to be awakened. How did you come by such power? I’ve not, in my limited eternity, seen an ancient. This is a vexing development, mortals in the chambers and forces that once took defeat at the Planets’ merciful justice.’

‘And? Yes? Planets! Do you have a problem with that? Venus will be interested in you. But who sent the furies? They’re beasts of another time; unpredictable, yet they left you both unpicked by their claws.’

‘Who are you?’ asked Cameron.

‘How tiresome,’ responded the Fallen Angel. ‘You are the one no doubt who provoked the rage that brought all this about: an event that might not be reversible.’

‘What is this? Am I dreaming? I was in London, Scotland, and no idea where this is,’ said Elasaid while scratching her head.

‘My dear, this is far more real than any of those sad little places.’ The Fallen Angel took up the pole once more, but instead of searching for holes or portals in the seemingly solid granite, bounced it on the stone absent-mindedly. Suddenly, Elasaid remembered that the strange man from the London riots staring at her by the alleyway under the hypnotising moon was the angel now standing in front of her very eyes.

The Fallen Angel bellowed, ‘I know, it’s me, why would I not know it’s me? I don’t need you to tell me that it’s me.’

‘In the alleyway. You summoned us. Pulled us here. You have that power.’

‘My dear, what do you know of power: a child with the Azoth that she doesn’t even recognise? Do you understand where you are? Don’t answer. It’s a rhetorical question,’ The Fallen Angel said. ‘There are chambers, antechambers, to infinity. No time, only the infinite. It’s so stupid to believe in power when it’s the servant of a time that does not exist. Ah, my children, you are trapped in a timeless world. What to do?’

The Fallen Angel feigned a concerned pose by holding his fist under his drooping chin. Elasaid had witnessed enough posturing from her mother’s dropout boyfriend to catch the body language.

‘But to where?’ asked the angel.

‘You know where,’ Elasaid replied.

‘Do I?’ asked the angel. ‘You seem very certain of yourself. How am I to know? You’ve lived many lives, actually, hundreds of thousands, pick one.’

‘You’re not much use,’ Cameron interjected.

‘As I said, I did not summon you. There must be a plan. It may be with the Planets, Alchemists, beasts or lost souls. Whoever brought you here has strong powers to summon ancient forces. There are only two beasts I know that might have the answer. The Green Lion or the Sacred Ibis.

‘Speak to a lion?’ asked Cameron.

‘You’ll need to unlock the doors to each antechamber. I cannot offer any further assistance. Allegiance to either the Planets or Alchemists is a dangerous game at these times.’ Sparks flew from each brazier then the angel disappeared.

Cameron picked a charred feather off the granite floor. ‘He’s left a piece of him behind.’

‘What kind of thing has feathers sticking out of its back?’ asked Elasaid.

‘This place gives me the creeps,’ said Cameron.

‘We need to get into those antechambers. We don’t have anything else. Move forward, Cameron, for if there’s one thing I learnt from Mum and those loser boyfriends of hers: staying still gets you nicked.’

They both moved around the cavern as if they were doing a strange polka dance. Up and down, over rocks and under stones, until Elasaid stumbled over a tiny pool. Its water settled in machined flat stone, unlike the rough-hewn granite. She crept up to its edge and crouched, peered into the water’s depths. Stillness. Darkness. Solitariness. Then, a formed hand of water particles rose above the surface into the granite air. Viciously wheeling with a swirl of droplets, the palm twisted to Elasaid. Caught in shock, she froze; couldn’t scream. The hand and the girl petrified as if Mount Vesuvius itself had covered them in lava. The hand broke first by pointing a finger gingerly down to where it had materialised.

‘We’re taking a different part of the cave. Stick to the agreement. You’re always changing stuff around,’ said Cameron.

Cameron crossed between the braziers to the pool. ‘Oh, what is that?’

Droplets flew. Its fingers and thumb wriggled. Elasaid unlocked her muscles, scraped back over the rocks, but the hand and arm elongated fractions from her face.

‘It?’ Elasaid asked. ‘That’s a hand of water chasing me around the cave.’

It says he’s the doctor from the hospital. You’re in a coma; we’re both in a coma locked deep in the unconsciousness,’ said Cameron.

The hand shook vigorously. It switched around, directing its finger onto the pool.

‘There’s something in there. Beneath the water,’ Cameron said.

‘I’m not putting my hand in that,’ shouted Elasaid.

‘It wants us to look into it.’ Cameron said while taking a step forward.

Calm appeared, in the form of suspended droplets that allowed the mist to clear. In the pool the droplets came together in the shape of a goblet, then coin, sword and staff, before the story of the pathway into their subconsciousness unfolded. It revealed how their journey had begun at the London riots and then continued into comas, brought them out as Scottish Highlanders at the time of the Battle of Culloden and into the claws of the snake-haired beasts whose wings swooped them up through the corridors and portals and into the chamber. The Sacred Ibis and the Green Lion antechambers featured last – a quick vision of their future path. The hand collapsed into the water.

Elasaid crossed her legs. We’re in the subconsciousness – stupid idea. Cameron fretted without his mobile – this would’ve been great for TikTok – both seated, absorbing the new world.

‘What next?’ asked Elasaid, eventually.

‘Keep searching,’ replied Cameron, ‘what else can we do? What’s that?’ At one corner a carved stone appeared with the crafted image of a rose on it no bigger than a pebble. He clasped it between finger and thumb.

Why had Sophia, her mum, thought it so stupid to believe in fairies, leprechauns, goblins, nature spirits and elementals? Hamish, the latest loser boyfriend, had egged Sophia on: describing Elasaid as a white witch. Not that Elasaid cared for their opinions. What was a white witch anyway? That was even harder to accept than an elemental. This pebble of the earth she recognised. Sophia’s friend, Jenny, the constant shadow from infancy, often speculated over many bottles of red wine and herbal stimulation about Elasaid. ‘Too bright for her own good’ was an oft voiced verdict on the speculation list, frequently followed with – ‘And don’t get me started on that other one!’ Why hadn’t Sophia raised a defence against these strategic moves of Aunt Jenny’s?

‘If we’re in a coma,’ said Elasaid, ‘why does this feel so real? Do you remember Scotland?’

‘I do. I imagined that was a dream, but it was in the vision. That’s what the hand was trying to show us: we came through Scotland but via the past. One second.’ Cameron reached into his pocket and pulled out the thistle. ‘How can that be? We’re wearing different clothes – weird ones if you ask me, yet the thistle is still here.’

‘Yes.’ Elasaid replied. I recall the power of nature spirits and the elementals from those times.’

Cameron rolled his eyes. ‘Here we go. How convenient.’

‘Listen. We’ve got to get out of this coma and back to London, right?’ Will you put a bit of faith in these things? That carving means something,’ said Elasaid.

Together they stared closely at the carved pebble, hoping for some kind of sign to emerge from its eroded face. But nothing came.

‘You’ll have to put your hand in the pool,’ said Cameron.

Elasaid touched her thigh. Her body felt real, but she detected the emergence of a strange energy surging through her arms and legs.

If you enjoyed reading this, then download The Seven Chambers game and continue your journey.