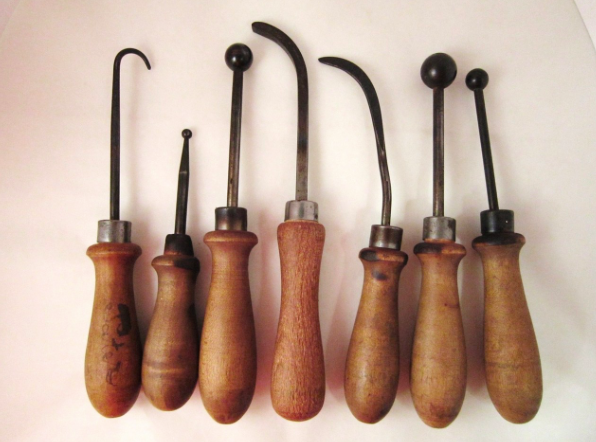 Leather has the distinctly unique property of drawing in Cosmic Energy.  It acts like a powerful antenna capable of deciphering the seemingly undecipherable.  Whilst leather making is an ancient craft, its also a nasty business.

In the 18th century, leather-making caused such a stench in London that it was outlawed from the city and forced downwind across the river into Bermondsey.  Modern production entails less stomach-turning methods of leather making, but the dog turds and stale urine are replaced by the environmentally unfriendly caustic chromium and other chemicals.

Leather is a $100bn (annually) business.  A company in New Jersey has developed a technology to grow leather using a strain of yeast that is genetically engineered to make collagen.  In our new relationship with the planet and its animals, investors are inevitably queueing to invest for a piece of the action.

What would Elasaid think about that?  In The Seven Chambers game, she visits some ancient trades in order to collect the tools she needs to progress through the Chambers.  These are the tools of the Alchemists; leather being one of them.

Can genetically engineered leather still draw energy? Would Elasaid still be able to use laboratory-grown leather as a potent tool against the planets?

We entered the new moon of Virgo earlier this month.  Virgo is ruled by Mercury, and in conjunction with Venus, they have an erratic effect on the mind and body given that they shift and backtrack their passage around the Zodiac.

Mercury and Venus act as the intermediaries between the body and the psyche, or the ego’s altering states.

Therefore, as we rise above our mundane lives to meet the challenge of the Cosmos this month, remember that your shoes and your handbag might also be challenged as they pick up a little bit of Mercury action.

The first garment from bio-tech leather will be displayed on October 1st at the Museum of Modern Art in New York.

It marks an event where leather takes its first steps away from the abattoir and onto the catwalk.  Mercury may not notice it but Venus will be very happy as long as the Gucci handbag still draws her cosmic energy of art and fashion.